I can't believe it is almost the end of the year!! Wearing my summer clothes every day, I still have the feeling that it is August!I The climate (27 degrees during the day and 22 during the night) does not contribute to my Christmas feeling. ;-) But it is really true, tomorrow afternoon I will pick Erik up from the airport and we will celebrate Christmas and New Year's together in the upcoming two weeks!!!!!! Hmmm, I really can't wait! I am here now for three months and it is not always easy to be so far away from each other. I missed him a lot.

The past two weeks I conducted interesting interviews. I spoke with two persons working for the Office of the High Commissioner of Human Rights, a gynecologist, a doctor who does surgical repair of FGM/C, someone working for UNFPA and many persons working for NGOs. The interviews were very interesting and I hear less and less new things, so that's a good sign! ;-) My goal was to conduct 35 interviews before X-Mass, and I am more than happy to tell you that I conducted today interview no. 36 and no. 37!! :-) My goal of 50 interviews in those four months is getting into sight!

Here are a few pictures I took during my taxi rides on my way to interviews, that gives you an idea of how Dakar looks like. 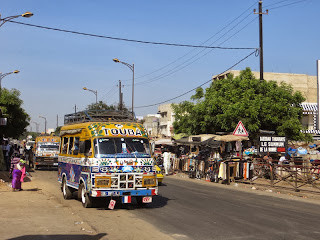 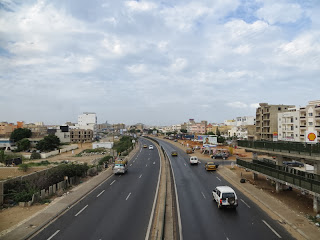 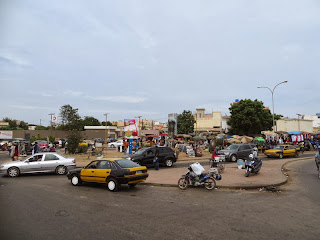 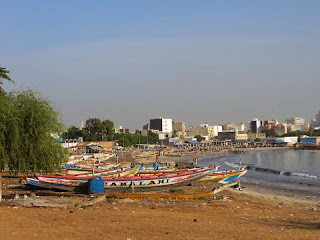 Sunday last week I went with Marieke, one of my Dutch friends in Dakar, to the HLM Market to buy some more beautiful African fabrics to make some dresses. Yesterday I picked them up and I really like them! The tailor is amazing. For the price of an H&M dress, you'll have a custom made dress! :-)

Last Friday I went with some colleagues of the Embassy to a nice concert of the Alibeta Nomads Band. Of course it started 1,5 hour too late (welcome in Senegal!), but we really enjoyed ourselves. I took a short movie to give you an impression, you can find it below. 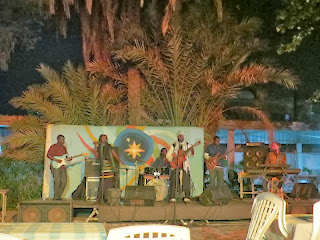 Last Saturday, I went out for dinner in a very nice Lebanese restaurant with three Dutch girls. We had a great time! During the dinner, I really had to think a lot about my 6 months internship at the Embassy in Israel, the food tasted just like the shabbat dinners of safta (my Israeli grandmother)! Miiiiizooooooo, I miss you!!!!!!! 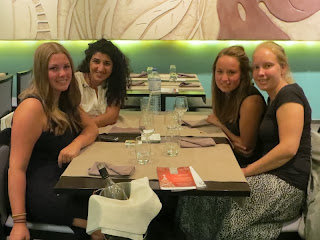 Last Sunday, I received a phone call from Molly Melching. She is the director of Tostan, one of the biggest NGOs working in the field of FGM/C. She asked me if I would be interested in joining her and Julia of the Orchid Project on Monday to a village. I was extremely excited and so thankful for this invitation!

So last Monday, I woke up very early in the morning, packed my bag, and went to the Tostan office. It was an amazing day and surely one of the highlights of my fieldwork so far. We went first to a village called Keur Simbara where we spoke for about 3 hours with an interesting man, called Demba. He is over 80 years old, and has so much experience. He told us that he visited 347 villages to share why they stopped FGM/C in his community. Demba says he remembers the last girl in every village who was cut. In his village of Keur Simbara, it was his granddaughter. He says that there are always some whose "minds walk before them on the road" and that we must be those people. Julia and I could ask all the questions we had and Molly translated from Wolof to English. It was so interesting!!!

In the book, However Long the Night, Molly writes about Demba. He was one of the people who protested at the Parliament in 1999 against the adoption of the law. According to him, the country was not ready for a law and could, according to him, even work counterproductive. But surprisingly enough, now he said that they have done enough sensibilisation and awareness raising. He said: "Now it's time to really start prosecute people." He was the last person I would expect saying that!!! Afterwards we went to the Tostan office in Thies and we discussed about all the Tostan projects. 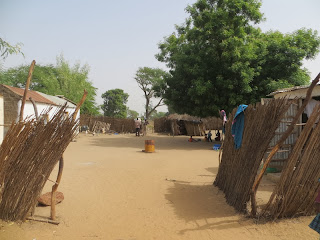 Last week, I also managed to extend my visa. I am so glad it is done!! I started to become quite nervous since it would expire the 27th of December. It took me the past two weeks a lot of time, money and energy to get the extension done. I had a letter from the university explaining why I need four months for my research, but this was not enough unfortunately. I went to the police station many times and every time there was something wrong. Luckily enough the Ambassador intervened and wrote a letter for me, which helped in the end a lot! :-) I was so glad that I walked out of the police station yesterday with a new visa in my passport!

This blog gives an insight in my life in Senegal. Some people might have the idea that my research goes very smoothly and that it all goes by itself. But: to be honest, it has not always been easy in the past few weeks and it proves to be quite challenging to work in Africa. I knew it beforehand, and I was prepared for it, but nevertheless it is sometimes quite frustrating. It takes a lot of time to schedule meetings for the interviews and it is not always easy to be so dependent on someone - for example my interpreter. She has some personal problems and therefore she is not always available when the people I want to interview are available. That makes it sometimes quite difficult for me... On top of that, the Senegalese people often do not respect the time. I spend hours and hours waiting for them.

Although these things are sometimes very frustrating, of course I do not give up and I carry on! But you can imagine, it takes a lot of energy to get the interviews done. I also started to look for another interpreter, to make sure I can conduct all the interviews I want, also when my interpreter is not available. I thought it would be hard, but luckily enough I found another one this week (for a reasonable price!). :-) Today I conducted the first two interviews with her and I was very satisfied. She lived in the US for 4 years and her English is perfect. She also has a lot of experience in translating so I am glad I have a back-up plan for the month of January.

I look forward to the next two weeks: just relax, and take some time off. I feel I need to rest and take it easy. I might have asked a little bit too much from myself the past weeks to get the interviews done. I have lost a few pounds and I am quite tired.

Therefore, it's time to turn off my laptop and enjoy a two-week vacation with my love! I can't wait and I am so looking forward! We'll go surfing in Dakar, visit the Lompoul desert, as well as Saint Louis, a historic town in the Northern part of Senegal.

I wish you all a merry Christmas and all the best for the new year!!

Lots of love from Dakar,

Annemarie
Posted by Erik & Annemarie at 21:37