First of all, I would like to wish everybody a happy New Year! It was very special to celebrate Christmas and New Year's Eve together in Africa. We enjoyed every minute together and we had so much fun!

The first day of Erik's visit, I surprised him with a trip to Îles des Madeleines, an Island off the coast of Dakar. It is the smallest national park in the world, and a UNESCO World Heritage Tentative List site. It is such a beautiful Island and I couldn't wait to go there. We were lucky with the weather, 27 degrees and no high waves, so the pirogue (traditional boat) did not have any problems to bring us there. The Island was indeed a little paradise and uninhabited by man. According to our guide this is the case because it was inhabited by evil spirits in the past and now nobody wants to live there.

For the people who know Erik, he likes to barbecue. The first thing he wants to do when the summer arrives in Holland is to put some food on the barbecue in our garden. Therefore, I bought some fish, and I arranged a simple barbecue for him. As you'll see on the pictures, he did not like it at all... ;-)


During our days in Dakar, we also went surfing. I took some lessons and learned how to surf in Australia and I did it again in Bali, but that was almost 9 years ago. For Erik it was the first time. We both had so much fun in the water, struggling with the waves. :-)

Christmas eve we went to a restaurant in the city center of Dakar. We enjoyed a six-course meal and it was the first time we had a Christmas feeling. It is still summer in Senegal, with temperatures around 25-30 degrees. That did not contribute to our Christmas and New Years' feeling. At the same time, Senegal is a Muslim country and the people do not really celebrate Christmas. In some streets you see Christmas decoration and lights, but it is not very common. However, when we enjoyed a delicious dinner next to a 'Christmas tree', we knew 100% sure it was indeed Christmas.

After spending some days in Dakar, it was time to travel around in Senegal after Christmas. We traveled up north the coast and the Lompoul desert was our first stop. We arrived at the desert just before sunset. We slept in a tent with outside toilet and shower and there was an amazing restaurant. When we arrived, a guy was preparing some meat (we couldn't discover which meat, perhaps a goat) on the barbeque. It tasted delicious!

After two days in Lompoul, we went further up north the Senegalese coast to the city Saint Louis. We travelled the 'Senegalese way' with public transport and the people were wondering why these two toubab's (Wolof word for white person) decided to travel this way. But after we spoke a bit in my limited Wolof and negotiated the price (no toubab price for us!), our backpack was hoisted on the roof of the bus, and we were on our way to St. Louis!
When we arrived in Saint Louis, we took a taxi to the hotel where we stayed for 5 days. The hotel was owned by a Belgium couple and could use some renovation, but it was a perfect base from which we were able to make several trips.

Saint Louis was the capital of the French colony of Senegal till 1902 when the capital was moved to Dakar. We made a nice 10 km walk in the city center. The old colonial buildings and houses were so pretty. In that sense, Saint Louis is much more beautiful compared to Dakar. 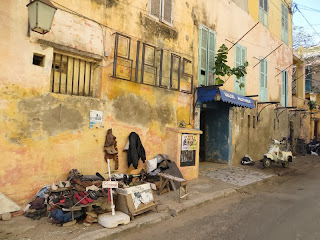 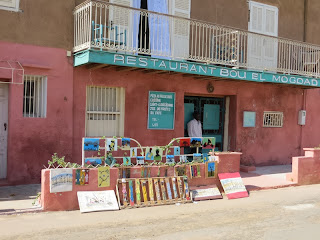 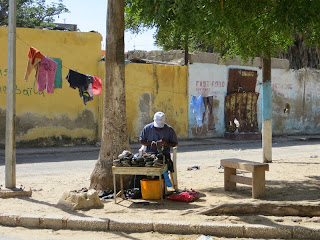 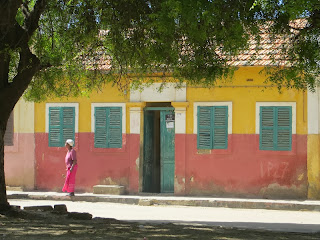 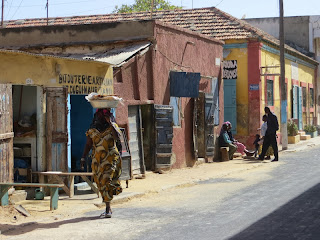 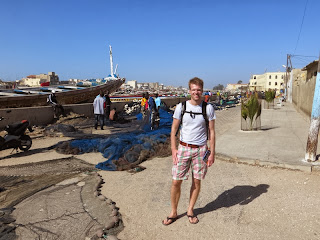 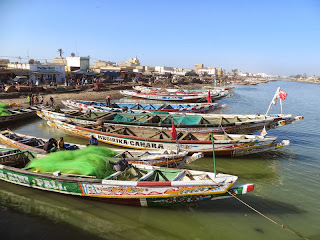 The next day, we visited the National Park Djoudj, which is famous because of the millions of migrating birds that visit the park each year. The Park is located close to the Mauritanian border, an hour ride from Saint Louis. Especially this time of the year, when birds just crossed the Sahara, this park is full with birds, especially pelicans. It was really amazing and we both felt we were in an episode of Discovery Channel. ;-) Apart from many birds, we also saw crocodiles and a snake. 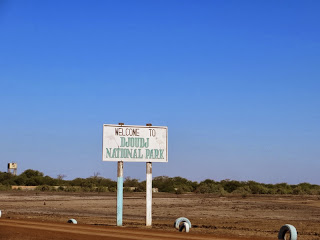 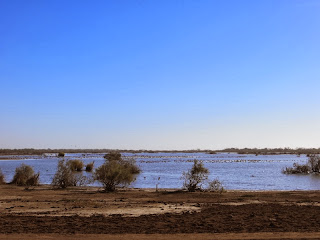 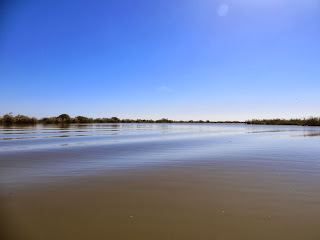 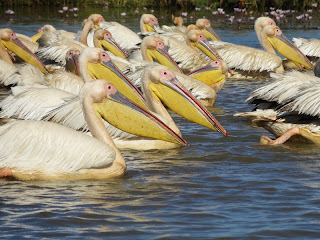 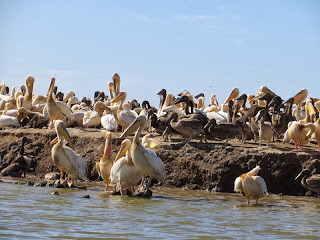 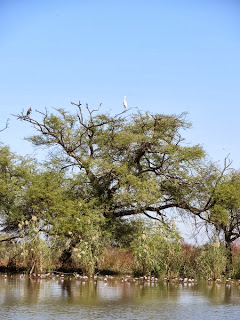 We celebrated New Years in Saint Louis. In the night we had dinner with some guests of the hotel. Just before midnight, we walked to the beach and at 00.00h we opened a bottle of champaign. We reflected on 2013 (What a year!) and we spoke about our dreams for 2014...

The 1st of January we went to the Reserve of Guembeul. It was a relatively small national park, but very beautiful. With a guide, we made a hike through the park and we saw many animals, such as turtles, gazelles and monkeys. 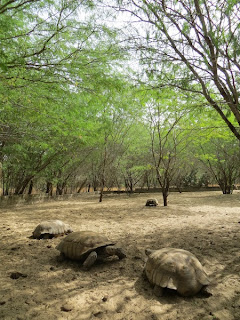 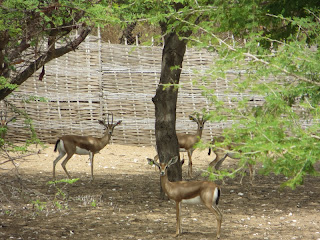 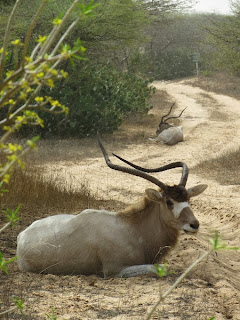 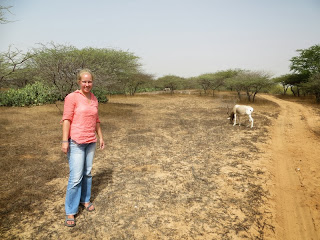 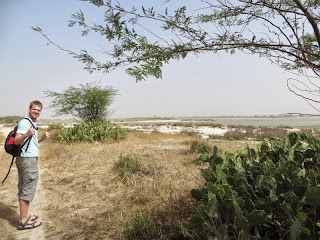 After we visited the park, we also went to a small village, where we took a pirogue (traditional boat) and visited National Park Langue de Barbarie, where the sweet water of the Senegalese river and the salt water of the Atlantic Ocean reach each other.

The next day, we traveled back to Dakar in a sept-place. The last day of Erik's visit, we went to the beach of Yoff again and he took another surfing lesson. It was a very beautiful day, 30 degrees, and he did so well!! Below you'll find a few pics and a short movie. 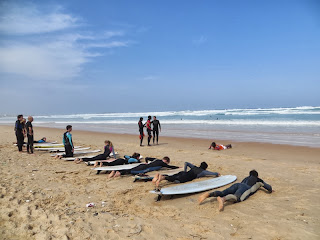 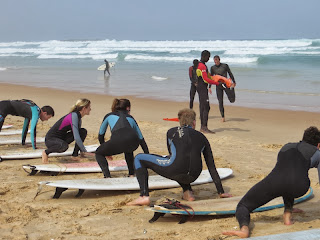 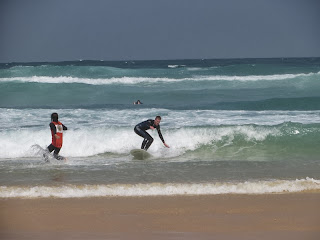 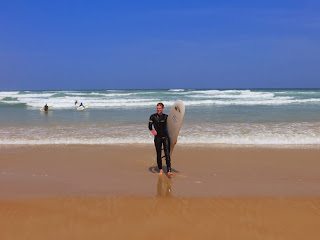 After two wonderful weeks together, it was time this weekend to say goodbye... It was difficult to let him go at the airport and to take a taxi back to my apartment all alone.

Nevertheless, I am looking forward to the upcoming four weeks. I identified around 15 more people I want to interview and I will be busy organizing a conference at the residence of the Ambassador to present my preliminary research results on January 27.

And, last but not least: tomorrow I will pick up Eefje and Stephane who will be part of my Senegal adventure for 10 days! I am really looking forward to see them. I am sure we'll have a good time!

I keep you updated.