In the past days I received from quite some friends an e-mail saying: "We are waiting for your new blog, when will you update us about your new adventures? It has been a while!" When I just coincidentally came across my statistics, I was quite overwhelmed: my blog has been viewed more than 2800 times! Indeed, it had been two weeks since my last blog and a lot happened. So this morning I decided to make a cup of coffee, upload my new pictures and start writing. ;-)

Let me start by saying that I have been quite sick for a few days and that is also a reason why my blog post took a while. Of course I knew that one time it would happen sometime during my stay in Senegal. I am quite often invited at Senegalese families and of course I don't know where they bought their meat and whether their fridge is working. I am always very careful, but last week I ate something wrong and I felt terrible. I spent two days at the toilet, I could not eat and I felt very weak. At these moments you feel quite lonely and you realize you are in Africa, far away from home, far away from all the people you love, just by yourself. I was glad I did not have fever, so I was not seriously ill, but it was 'only' my stomach which was protesting. I think I have lost a few pounds, but luckily enough I recovered and I feel much better now!

In the second place, I was very busy the past two weeks with my interviews. It seemed that all people I contacted in the last months were all of a sudden available! I conducted 13 interviews since my last blog. I am happy that it seems that my ambitious goal of 35 interviews before X-Mass starts to become realistic. :)

The interviews I conducted were very interesting, especially because I had a wide variety of people in front of me: for example a parliamentarian, an imam, a social worker, a professor, a lawyer, a gynecologist (working for the WHO), employees of USAID and UN Women and members of local NGOs (for example ASBEF and COSEPRAT).

I also managed to schedule a meeting with Molly Melching, the director and founder of Tostan. Tostan is one of the biggest NGOs working in the field of FGM/C. She was actually the person that was no. 1 on my list of persons I wanted to interview. It really took some effort and time to reach her, but I felt very honored that she wanted to meet me. A few days before the interview I even received an e-mail from her saying: "I am looking forward to speaking to you." I was excited that she made time for me in her busy schedule. Our meeting was rescheduled more than 5 times, but it finally took place last week. She was so nice and had so much knowledge! She said that she was impressed by the rigor of my research and my knowledge about FGM/C. That was such a big complement, especially because I really look up to her. She was so kind and gave me a ride home and we'll meet again next week for the second part of the interview. Me = happy!!!!

Last week I also had a meeting with the vice-president of Senegal's human rights committee. It was very difficult to schedule a meeting with him, because he is always traveling and extremely busy. Bijou and I managed to meet him two days ago and I had 15 minutes to ask my questions. Again, I felt so honored, especially when his secretary knocked on the door after 15 minutes to tell that his next appointment arrived: the President of Senegal, Macky Sall!! OMG!

And when you tell others that you had appointments with this and this person, they say: "Oh really? You spoke to him/her? Then you should also talk to this person!" Hihi, now I am at the point that people take you very seriously and they really want to help you to reach to other 'important' persons. While at the beginning most people see you as 'disturbing', taking an hour of their time while they are already extremely busy. But now they want to help me to make my research a success and make sure that I speak to everybody who is important in the field!

I still can't believe it, but I even have an appointment now with the Prime Minister! She has spent her life working as a human rights and women's rights activist, in Senegal and around the world. She worked before at the Senegalese NGO ASBEF and in New York for the UNFPA. Afterwards, she became Senegal's Justice Minister and is now the Prime Minister. She has a lot of knowledge about FGM/C and I can't wait to meet her!

Two days ago I was invited by a Senegalese doctor who does surgical repair for women who have undergone FGM/C to come to a panel discussion on FGM/C at the International Fair. I went there last Friday and it was so interesting to be there. The first part was an anatomy lecture about the female genitals - for me also very interesting and I learned a lot! ;-) The second part was a debate between a sexologist and the doctor about the (sexual) consequences of FGM/C. Especially the questions of the people attending the conference were interesting. I sat there, with my notebook, just observing and making notes of what was happening. So interesting!!

Translation: Conference: Public (in French) about the reparations of Female Genital Mutilation by Doctor Abdoul Aziz Kasse, on Friday 6 December 2013 at 17h at the house of the Press, next to the stand of Prevenir-Listab.

The Panel Discussion officially started at 5pm, but of course... it started an hour late and also lasted three hours instead of one. Nevertheless, I found it very interesting and I would not have want to miss it! And, because it started too late, I had the chance to walk around and see all the other nice stands at the fair.

Apart from running from one interview to the other and do things related to work and my research, I also took some time to relax. Last weekend we celebrated Sinterklaas at the Residence of the Dutch Ambassador with the Dutch community in Senegal. In the morning, I helped with the preparations. After all the debates in the Netherlands the past months, the Embassy decided to have 1 black Piet, one green and one orange - taking into account the slave history of Senegal.

I am very happy Dakar offers a wide variety of concerts and performances. I just love the theater and when I found out that the Béjart Ballet Lausanne came to Dakar, I made sure I did not miss that Ballet performance!! I bought a ticket a few weeks ago and last weekend I went to the National Theater with two colleagues of the Embassy. To be honest, it was one of the best ballet performances I have ever seen. It was really amazing. They will perform from 13-16 March in Carré in the Netherlands. If you have the chance, you should go there! ;-) 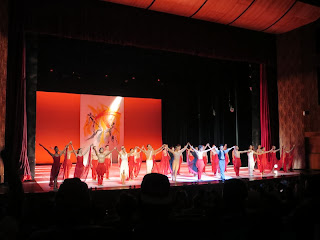 Yesterday we celebrated Sinterklaas with a few Dutch girls (the ones who were the Pieten last weekend). We wrote poems for each other and bought a small present. We had a lot of fun! Today I will go with Marieke, another Dutch girl, to the HLM market. We really liked the dresses the tailor made for us and therefore it is time to buy some more fabrics. :-)