The past weekend was one of the highlights of my field study so far and I will never forget this ceremony in my life. I went to a village in the Kolda region (southern part of Senegal) to attend a Public Declaration. More than 2000 people came together, from 550 different villages, to declare that they will abandon FGM/C and forced marriage in their communities.

On Saturday morning I woke up at 5am and I took a sept-place to Kolda. Kolda is located in the soutern part of Senegal, about 400 km from Dakar. The roads are quite bad and it took me 10 hours to get there. Nevertheless, it as such a nice ride (Senegal is sooooooooo beautiful!). We took the road through Gambia and we crossed the Gambian river. The southern part of Senegal is very green, there are many trees and beautiful birds. It really looks like paradise and I wondered why there are no tourists here. I enjoyed driving through the small villages with the typical round mud huts with a thatched roof, the colorful clothes, the women preparing food while the sun was setting. Life was so simple here, but at the same time so beautiful. This was Africa and I felt so incredibly grateful that I am able to do my research here.


I arrived Saturday night in Kolda and I stayed in the same hotel as the UNICEF staff. When I was checking in, I met Moussa Diop (the communications officer of UNICEF) and afterwards we had dinner together in Kolda. He took me to a Djibouterie where we ate a chicken from the barbecue.

The next day we left early in the morning to the village where the Public Declaration was going to take place. I joined UNICEF and the Senegalese national television crew to the village. I was impressed: the declaration would be broadcasted at the national TV!

It was a two-hour drive from Kolda to arrive in the village in the department Medina Yoro Foulah. Since I travelled with UNICEF and the RTS crew, I was all of a sudden part of the 'official delegation' and I was treated like a princes and placed on the front row next to the UNICEF staff and the representatives of the government, haha. ;-)

The next hours were really amazing and I observed all what was happening. The ceremony started with a prayer of the Imam, which is very special if you know that many people perform FGM/C in Senegal because they think it is a religious obligation. Afterwards, there were many speeches, for example from the mayer of this department, a representative of the communities, the Family Ministry, UNICEF, the representative of the regional department, TOSTAN, the medical chef of the region, etc. I was afraid that the ceremony would be in Pulaar or Soninké (the tribal languages in this area) and that that the ceremony would be a nice experience, but that I wouldn't be able to understand what they were saying. However, I was happy to find out that all speeches were in French, so I could easily understand everything. :-)

I realized that everything I read in reports in the past two years, was actually happening in front of me. It felt so lucky to experience all this. During this speeches, they were all referring to human rights. Up to this weekend, I found it hard to believe that people in these remote villages, who did not go to school, who can hardly read or write, talk about human rights. But it was true, it was really happening! I could see it with my own eyes! They spoke about the right to health and the right to physical integrity. 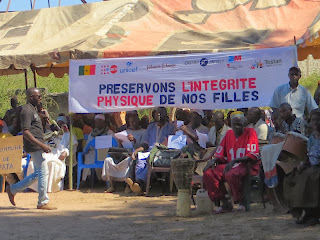 The banner of the first picture says: The communities reaffirm their commitment for the promotion of the right to health of girls and women and the banner on the second picture says: Preserve the physical integrity of our daughters. After two hours, the declaration was read out officially. I learned later that it was not only this ceremony, but the declaration was an official document, signed by all important people in the region.

In between the speeches and official statements, there was also enough time for music, dance and animation folklorique during the ceremony. 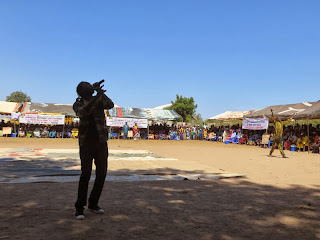 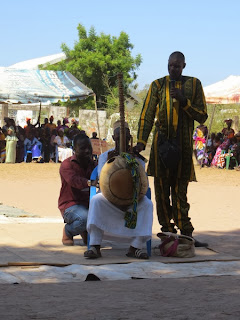 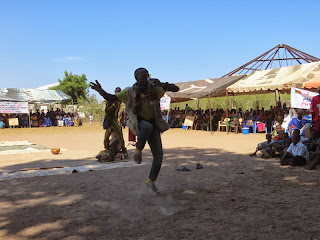 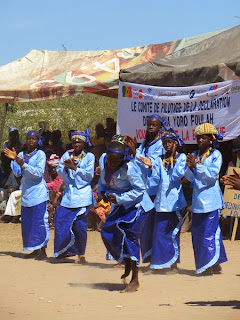 I also made a short movie to give you an impression of the atmosphere during the ceremony, that you can find below. The representative of the Economic, Social and Environment Council gave his speech during this short movie.

Yesterday I traveled back to Dakar. This time not with the sept-place, but the people from the Orchid Project (an NGO based in the UK) were so nice to offer me a ride back. It was so comfortable: a Toyota Landcruiser with airco, instead of a sept-place!! Hihi, lucky me! ;-)

Last week I also conducted 4 interviews with people working for the Justice Ministry, UNICEF, the Senegalese Association of Female Lawyers and Save the Children. They all provided me with a lot of information and every time I left their offices I had a big smile on my face. All the interviews are so interesting and they really make me think about my research topic in such a different way!! :-)

Today I am working at the Embassy again and I have planned several interviews this week, including one interview with Molly Melching (the founder of Tostan). I am very excited to meet her and I can't wait to hear her answers to my questions!

After all, time is flying. I am already half way my field study!! Two months to go before I will go home.