The past 10 days were really amazing. To be honest, it felt like our second honeymoon! ;-) It was so nice to be together again, after almost 6 weeks! I missed Erik so much and I was so happy to be able to give him a big welcome-in-Senegal-hug when I picked him up from the airport!

The first day we went to my favorite beach in Dakar, at the island of N'Gor. For 500 CFA (less than 1 euro) you can take a traditional boat to this little Island, where you can find a quiet, clean and beautiful sandy beaches. It was a nice way to start our vacation.

In the weekend, we explored the nightlife in Dakar. We started the night with a nice cocktail at a bar called Charly's and afterwards we went to Koulgraoul and danced till early morning on the African beats.

We also visited Lac Rose in the weekend, that is named like this for its pink waters, caused by an algae in the water that produce a red pigment that uses sunlight to create more energy, turning the waters pink. However, this beautiful color can only be enjoyed when the light is right (mostly in dry season when the sun is high). Although the rain season is over, were not lucky and the lake had just a normal color. Nevertheless, it was very pretty, such a nice atmosphere in the village next to the lake. We also learned that the lake has a small salt collecting industry and that it was often the finishing point of the Dakar Rally.

Monday morning I conducted one interview and that was the last thing I did for work during our vacation. Erik slept out and I went to the city center of Dakar to conduct a very interesting interview with a young man who developed education courses for primary and secondary schools about FGM/C, in collaboration with the UNFPA. He was so enthusiastic the topic and my research, that I returned with a big smile on my face in my apartment.

In the afternoon we visited the beautiful Gorée Island (3 km off the coast of Dakar). This Island is known as the location of the House of Slaves (Maison des Esclaves), that shows the horrors of the slave trade throughout the Atlantic world. It is a museum that opened in 1962 to memorialize the final exit point of the slaves from Africa. There are no roads and no cars on this island, just narrow alleyways with colored traditional houses and ancient buildings. The island is a UNESCO World Heritage Site.

After a few days in Dakar, it was time to make a short trip to the Thiès and Fatick region. Tuesday morning, we took a sept-place (a 1980s-model Peugeot 505 with seven seats) to Djifer. We traveled down the coast to the Sine Saloum Delta, close to the border with Gambia. From there, we took a boat to the Dionewar Island where our hotel was located. It was 'only' 160 km from Dakar to Djiffer, but it took us more than 4 hours. We had a lot of fun and enjoyed the ride. The way was beautiful, we passed tiny villages, lots of boab trees and beautiful birds. It felt good to 'escape' Dakar's chaos and to go to the nature for a couple of days.

When we arrived at our hotel, two cocktails were waiting for us. We booked a cottage with sea view and indeed, the view was amazing!! Because it is not high season, there were not many guests and some days we had the swimming pool just for ourselves! We stayed here for four days and I enjoyed every minute. In the first place, I really enjoyed the shower. There was again no water in Dakar (Erik had the 'real' Dakar experience and also washed himself with a bucket of water) and it felt so good to take a real shower! I washed my hair and for a moment it felt like I was at 'winnaarseiland' (for the ones who also watch Expeditie Robinson). In the second place, I enjoyed doing nothing. No research, no e-mail, no telephone calls! :-) And last but not least - I enjoyed being together with the love of my life!

The following days we relaxed at the swimming pool, read a book and we just did nothing. I really had to force myself not to take the Senegalese National Action Plan on FGM/C or an Annual Report of the Joint Programme or NGO with me, haha. It was good to take some distance from my research for a couple of days. Instead, I read the book 'I am Malala', a must-read!! Erik bought it for me at the airport, it is a book about a girl from the Swat Valley in Pakistan who fought for her right to education.

One afternoon, we also made a trip to discover the Sine Saloum. It is a river delta formed by the confluence of two rivers: the Sine and the Saloum. Because it flows so slowly, this delta allows saltwater to travel deep inland. We went with a few other guests of the hotel in a beautiful painted pirogue (traditional boat) and a guide into the labyrinthine waterways. We saw many mangrove swamps, sand islands, beautiful birds and even a group of dolphins! It was an amazing trip, with a beautiful sunset when we turned back to the hotel...


The sunset the next day was even more amazing. Erik is playing football in the back with the Senegalese youth of Dionewar Island.

Of course we felt sad to leave this little paradise at this romantic Island, but on Friday we had to head back to Dakar. Our sept-place driver was waiting for us at Djifer and within 4 hours we were back in Dakar. On Saturday we went to an art gallery (the Senegalese are very creative people!) and afterwards to the tourist market at Soumbedioune. We bought a nice painting for our house in Tilburg and some presents for friends. In the night we had dinner with Bijou, she made a delicious Senegalese dish. Yesterday was our last day together. In the morning we packed Erik's backpack, we had lunch with Bijou's family and in the afternoon we went for a drink to the beach of N'Gor. And around 8pm it was time to kiss each other goodbye... It was not easy... 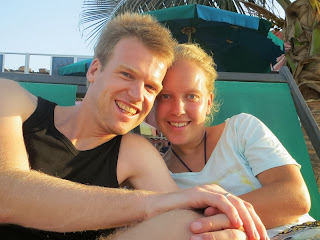 However, in 6 weeks we'll be together again and we both need to go back to work. This morning I started working on my research again. I e-mailed more than 15 persons to invite them for an interview and so did Bijou. This afternoon I will transcribe an interview I conducted the week before Erik came. Tomorrow I will work at the Embassy again, so I think I will go back to my daily routine before I realize. My goal is to have 35 interviews done before before X-Mass, so there is a lot of work to do! :-)

Lots of love from Dakar,

Annemarie
Posted by Erik & Annemarie at 13:51