When I finished my last blog post last Saturday, I went to the house of Bijou for lunch. The mother of Bijou made Thiebou Dieune, a delicious traditional Senegalese rice and fish dish. It’s one of my favourite Senegalese dishes! If you are interested in the recipe, click here! :p

Since her mother calls me ‘daugther’, the sister of her mother is now my ‘auntie’. After lunch, she made a nice cup of Senegalese tea for me.

On Sunday, I worked in the morning on the transcription of an interview. In the afternoon the mother of Bijou invited me to join her to her friend, who just came back from her Hajj (pilgrimage) to Mecca. This religious duty must be carried out by every able-bodied Muslim once in his or her lifetime. The state of being physically and financially capable of performing the Hajj is called istita'ah and a Muslim who fulfils this condition is called a mustati. However, many people here in Africa cannot afford the trip to Mecca it is considered here something very special (and worth a party)! ;-) I felt very honored that I was invited to this party! There were many people, family and friends, all dressed up, and in a great mood. When we arrived, I received a small cup filled with water, and I understood that this was holy water the lady brought all the way from Mecca. I had to drink it and afterwards I had to pray. Of course, no party without food and after a few hours, dinner was served. Men stayed in the living room to eat and the women moved to the bedroom to enjoy the food there. 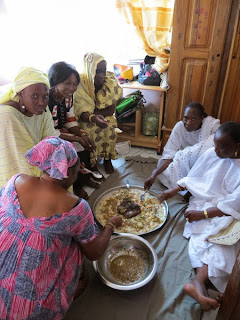 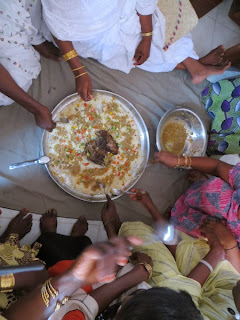 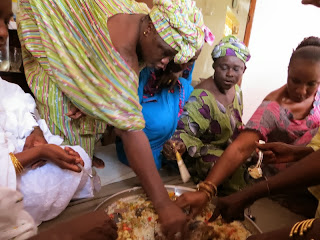 On Monday I had two appointments for interviews. The first one with a politician, the second one with the Directrice of the Family Ministry. Bijou joined me to both interviews and translated from French to English. This was the first time, because the previous interviews were with people who could speak English so I conducted them myself. I found out that she has a lot of experience as an interpreter, she worked for several NGOs like No Peace Without Justice and she really did a good job! I was so happy it went well! We had lunch in between the two interviews on Monday. After lunch, we called more than 10 people to ask if they would like to participate in my research.

On Tuesday we had another interview with a professor at the University of Dakar, who in 1999 developed the law against FGM/C and he conducted a study about the implementation of the law in 2010. He was very knowledgeable about my topic and provided a lot of interesting information! :D Yesterday I had an interview with a policy officer at the Family Ministry.

I worked on Tuesday and Wednesday at the Embassy, in between my interviews. Apart from calling and e-mailing people to make appointments for interviews, I studied this week the Senegalese constitution, I analyzed the most recent Demographic and Health Survey (DHS) of 2012-2013 and I even started writing my chapter!

Everything is going well, I conducted 9 interviews up to now and I am satisfied how it is going. All interviewees provided me with a lot of information, interesting insights and arguments, they are so valuable for my research!  As I told Rianne (my supervisor) last night on skype, I already learned so much in the past 5 weeks! I would have never been able to learn this from the books. I just have to experience it myself and to be here, to really understand the complexities of the cultural practice FGM/C. This morning I sat in a taxi, on the Route de la Corniche Ouest on my way to the city center, I stared out the window, overlooking the Atlantic Ocean, and I thought: “This is just too good to be true. Do I really get paid to do this?” I feel extremely honoured that I am able to do this research. I am 100% motivated and eager to learn more!

Haha, when talking about taxi rides… I am usually not so picky when I take a taxi, to be honest I jump in every taxi that stops in front of me. It happened to me already a few times the taxi tstopped in the middle of the road and that it had to be pushed to the side of the road. Or that the taxi driver removed the key from the ignition while the car was still driving (50 km/h)! Or that I had to hold the door, during the trip, otherwise it would fell out. And I had quite a bumpy ride when I took a taxi with one wheel a different size than the other three. However, the taxi I took yesterday was quite an extreme example in my taxi-adventures, because it had too much clearance on his wheel and at the same time the break was not really working! Look at this short movie below, and keep in mind that we only drove straight (as you can see when taking a look at the car left) ;-) I was so happy when I arrived at the Embassy safely, Inshallah. ;-)

And now... I am going to relax… The upcoming 10 days I will enjoy a vacation with my love! In a few hours I will pick Erik up from the airport. I have been restless all day and I really can wait to see him!!! It is time to do some real tourist-stuff: read a book at the swimming pool, drink a cocktail at the beach, discover Dakar’s nightlife and visit the Sine Saloum Delta!

I am soooooo looking forward!

Ps: Sorry interns (Alina, Maria, Sofia and Jason), I really feel guilty that you continue to work on the transcripts and your other research assignments, while I will enjoy 10 days of vacation... I am so sorry! I appreciate your hard work and enthusiasm!
Posted by Erik & Annemarie at 15:35